The Lowest Rates Available - We guarantee you will get the best publicly available rate on our website.
Free Full English breakfast for guests
EXCLUSIVE FREEBIES – mineral water and slippers on arrival for guests.
No Hidden Costs, Booking Or Service Fees - Many travel sites charge extra fees for bookings; we do not
Easy To Make Changes to your Reservation – Contact us directly if you want to make changes to your reservation to ensure changes are made accurately
Priority Consideration for Room Requests – Talk to us directly to receive the best Darlington Hyde Park experience.

Things to Do in Paddington 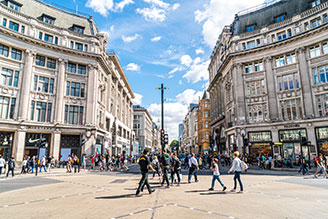 Oxford Street is located just 10 minutes’ walk from our hotel and is an ultimate shopping paradise with variety of shops that suit every pocket. It is one of Europe's busiest shopping streets with variety fashion, beauty, tech and homeware shops but also many eateries, pubs and coffee shops. The stretch known as Oxford Street is almost 1.5 miles long, running from Marble Arch to Tottenham Court Road. It is for sure a shopping paradise. 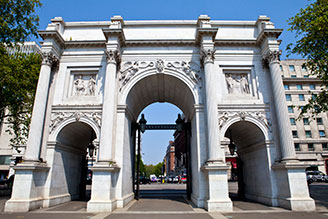 Standing just on the corner of Hyde Park, Marble Arch is one of the most visited sites in London. Marble Arch is a monument designed by John Nash located near Speaker's Corner. It is made of Carrara marble.Marble Arch stood as a formal gateway to Buckingham Palace for seventeen years. In 1850 the decision was taken to move the Arch to its current location of Cumberland Gate where it would form a grand entrance to Hyde Park in time for the Great Exhibition of 1851.The interior of the Arch is not open to the public but visitors can walk alongside the Arch throughout the day and are free to sit nearby to enjoy the fountains and small grassy areas that have been built around it. 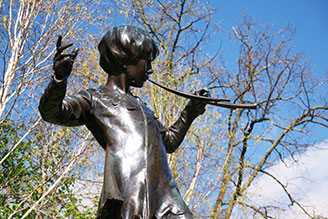 Whether it is for a morning jog, afternoon walk or a bike ride, Hyde Park is a lovely place to be and it’s so conveniently located just 8 minutes’ walk from The Darlington Hyde Park Hotel. Walking down to the west of the Long Water, you can spot Kensington Garden’s famous fictional resident, Peter Pan statue.The statue is a 1912 bronze sculpture of J. M. Barrie's character Peter Pan. It was commissioned by Barrie and made by Sir George Frampton, displayed close to Barrie's former home on Bayswater Road. Barrie's stories were inspired in part by the gardens: the statue is located at the place where Peter Pan lands in Barrie's 1902 book “The Little White Bird” after flying out of his nursery. 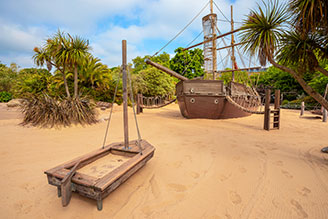 Right behind Kensington Palace, late Princess Diana’s home, you and your children can stop at Diana’s Memorial Playground to play and to have a bit of rest. Locals and tourists call it London’s well-hidden gem. The design was inspired by Barrie's Peter Pan. Its most prominent feature is a full-scale wooden pirate ship which serves as a climbing area for children, and is surrounded by sand in which they can play. Other features include slides, swings, and an area designed for those with disabilities, including fragrant plants and sound features (for those with visual disabilities). There is another memorial of Princess Diana with few minutes’ walk- in a southwest part of Hyde Park, you can find Diana, Princess of Wales Memorial Fountain where on warm days kids can play and run around in the water having a great and cheerful time. 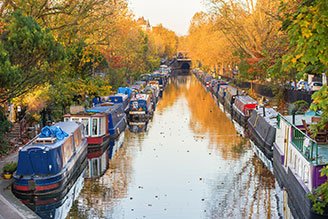 Little Venice, with its beautiful canals and waterways, can be found just to the north of Paddington, few minutes’ walk from our hotel. It’s the place where canals converge, so it’s lined with boats, all painted in vivid colours. With lush greenery everywhere, you could easily forget that you’re in the city.Explore Rembrandts Gardens, watch a puppet show on a barge, take a ride in a boat, catch the Canalway Cavalcade or have a laugh at Canal Café Theatre- all these just around the corner, with many eateries around, too. 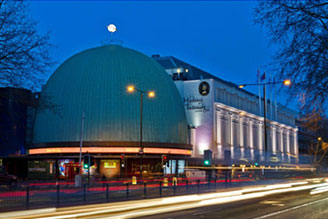 There is no way you haven’t heard about Madame Tussauds Museum. This chain museum for life-size wax replicas of famous celebrities and historic icons is located just 15-20 minutes’ walk from our hotel. With 14 interactive areas, Madame Tussauds London combines glitz, glamour and incredible history with more than 300 stunning wax figures. Check on their website for great deals available for advance bookings or combined attractions multitickets. 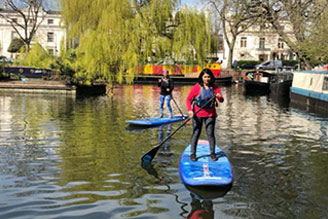 What an amazing idea to actively explore Paddington and London canals!Stand up paddleboarding (SUP) is the world's fastest growing watersport and Active360 are at the forefront of developing SUP in London. It's a very accessible sport, popular with people of all ages and provides a great workout to develop fitness and core strength.Their qualified, experienced and friendly coaches will get you on the water and paddling, providing all the equipment required, including wetsuits if you are worried about the chill. Paddington Basin, 10 minutes’ walk from our hotel, is a fantastic location for SUP. The canal provides a safe and environment for water sports and benefits from lively canal-side bars and restaurants as well as being close to Little Venice. 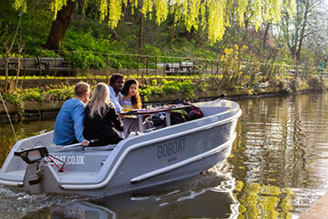 GoBoat is the fun, self-drive boating experience. From their location in Paddington, GoBoats have access to a stunning section of the Regent's Canal. No boating experience is necessary as training will be given upon arrival and you'll be given a route map to help you navigate your way, captain! Based in Paddington’s Merchant Square, just 10 minutes’ walk from our hotel, GoBoat lets you hire your own personal canal cruiser, for adventures along London’s canals in few locations. Cruising along at the sedate speed of 4mph, the boats are powered by an electric motor and come equipped with a table for picnics on the water. 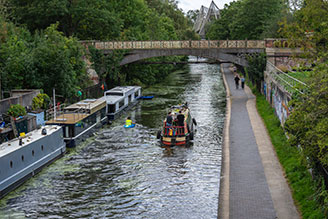 Enjoy London from a different perspective with London Waterbus boat. Travel along the Regent’s canal on board a traditional narrow boat in either direction between Little Venice and Camden Town passing through the 249 metre Maida Hill Tunnel and Regent’s Park. Trips are one way, take around 45 minutes and can be easily booked online. Perfect activity and the way to explore London for families and friends or simply alternative way to get from our area to Camden. 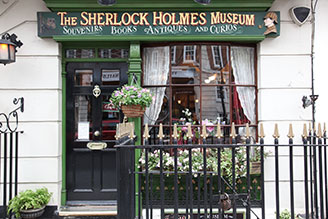 Just off Baker Street station, around the corner from Madame Tussauds museum, there is one of the most famous London’s addresses; 221b Baker Street. That’s where detective Sherlock Holmes resided and now it is a place of a lovely Sherlock Holmes Museum.Whether you’re a die-hard devotee of the original stories or a more recent Cumberbatch convert, step back in time to see where some of Holmes and Watson’s most famous cases began and imagine what life was like in a fascinating bygone era. The Museum also boasts the largest collection of Sherlock Holmes gifts and memorabilia in the world. Our gift shop offers a range of unique and exclusive Sherlock-related items to amaze even the great detective himself from deerstalker hats handcrafted in England, to puzzles, beautifully bound books and much more. 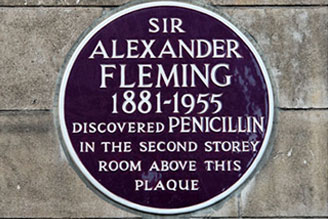 There is plenty around Paddington for history lovers- famous St Mary’s Hospital is located on Praed Street, just 2 minutes’ walk from The Darlington Hyde Park Hotel, where numerous royal births have taken place and where scientist Alexander Fleming discovered penicillin which earned him a Nobel Prize. You can visit his Museum- laboratory, restored to its 1928 condition and explore this magnificent story.An in-situ reconstruction of the laboratory, displays and a video uncover the remarkable story of how a chance discovery became a lifesaving drug destined to revolutionise medicine. The extensive archives of St Mary’s Hospital are also open for research. 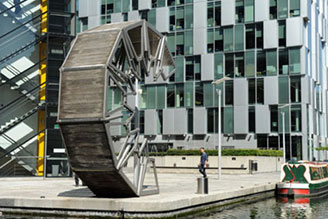 Paddington is a home to two very famous bridges, both located in Merchant Square. One of them is Rolling Bridge. To see the bridges in action is an unforgettable experience. The Rolling Bridge was conceived by Heatherwick Studio, designed by SKM Anthony Hunt with Packman Lucas, and built by Littlehampton Welding Ltd. The bridge consists of eight triangular sections hinged at the walkway level and connected above by two- part links that can be collapsed towards the deck by hydraulic cylinders, which are concealed in vertical posts in the bridge parapets. When extended, it resembles a conventional steel and timber footbridge, and is 12 metres long. 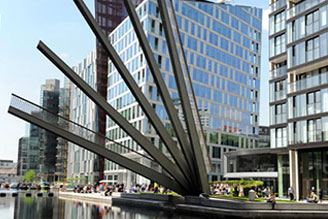 Fan Bridge is one of Paddington’s newest landmarks. Designed by Knight Architects, the three-metre-wide cantilevered moving structure spans 20 metres across the head of the Basin, rising by means of hydraulic jacks – an action similar to that of a traditional Japanese hand fan.The deck of the Fan Bridge is made of five beams, which came to Paddington by barge. The beams each open in sequence, with the first rising to an angle of 80 degrees; the four rising to lower levels. It is a great view when the bridge folds and unfolds. 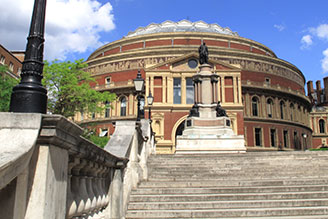 The Royal Albert Hall is one of the most famous music and concert venues in the world. It’s located on the northern edge of South Kensington, just across the Hyde Park, about 20 minutes’ walk from our hotel. One of the United Kingdom's most treasured and distinctive buildings, it is held in trust for the nation and managed by a registered charity. It can seat 5,272.Since the hall's opening by Queen Victoria in 1871, the world's leading artists from many performance genres have appeared on its stage. It is the venue for the Proms concerts, which have been held there every summer since 1941. It is host to more than 390 shows in the main auditorium annually, including classical, rock and pop concerts, ballet, opera, film screenings with live orchestral accompaniment, sports, awards ceremonies, school and community events, and charity performances and banquets. A further 400 events are held each year in the non-auditorium spaces. 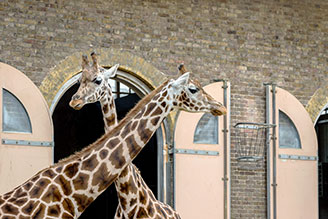 Short bus ride away or 30 minutes’ walk, within Regent’s Park, you can find London Zoo which is the world's oldest scientific zoo. It was opened in London in April 1828, and was originally intended to be used as a collection for scientific study. In 1831 or 1832, the animals of the Tower of London menagerie were transferred to the zoo's collection. It was opened to the public in 1847.Zoo life is packed full of wonder and amazement, with more than 750 species of animals to meet and thousands more surprising and fascinating facts just waiting to be discovered by you and your children and friends. 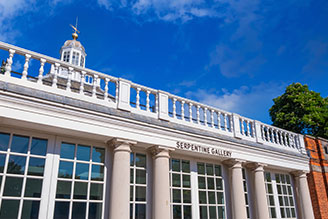 Our neighbourhood Connaught Village (3 minutes’ walk from the hotel) is home to wealth of art galleries. The area is thriving with outdoor installations and an array of independent art galleries showcasing new artwork. Filled with work influenced by a host of subjects, the galleries bring influence from across the world to the heart of London. 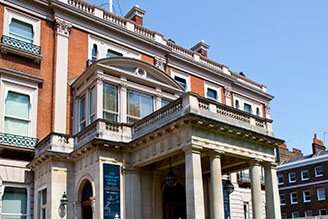 The Wallace Collection is a museum in London occupying Hertford House in Manchester Square, Paddington Neighbourhood area on Marylebone. It is named after Sir Richard Wallace, who built the extensive collection, along with the Marquesse’s of Hertford, in the 18th and 19th centuries. The Wallace Collection can be reached on foot from The Darlington Hyde Park Hotel in about 15- 20 minutes and entry to it is completely free.The Wallace Collection is an internationally outstanding collection which contains unsurpassed masterpieces of paintings, sculpture, furniture, arms and armour and porcelain.